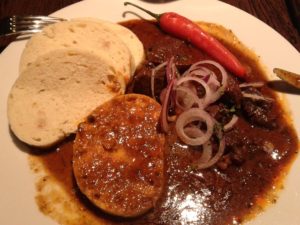 It would be a pitty to come to Prague without going to a local Czech restaurant. You’ll find a lot of restaurants around the center where you can enjoy some typical Czech food but some of them are of average quality.

One of the most popular adresses in Prague is “Kolkovna” restaurant (V Kolkovně 8, Prague 1) where you’ll find the famous Pilsner Urquell beer on tap for a bit less than 2 EUR. As per the dishes, you’ll find all the classics of Czech cuisine from the typical Pilsner goulash to the pork schnitzel with potato salad.

There are 4 other “Kolkovna” restaurants in town so you wont have any trouble finding one close to your accomodation. It’s definitely a good address, and it’s good value for money!